The legendary quote from Motörhead’s Lemmy Kilmeister suits pretty good to describe this years MusikMesse. The noise was just unbelievable loud! Constantly on 90+ dB, with peaks close to 100 dB for four days, 9 hours straight is insane. Other than that, it was a great show for EBS, and we broke a new record for the number of business meetings at the show!

The Gear
We did not present anything new that was not showed already at the NAMM Show, due to the two shows being so close in time this year, except for the new Y-type Insert cable, ICY-30, to be used with the EBS Billy Sheehan Signature Drive. However, sometimes the smallest things are important too, which explain the overwhelming response to the new clever patch cables from EBS, the PCF-10, 18, 28 and 58 (numbers indicating length in cm)! With a flat cable, and flat connector housing, these cables save space on your pedal board like no other patch cables, while maintaining the tone, and prevent hum due to the extremely low resistance and great shielding. The price that starts at about 3,50 Euro for the shortest one does not scare anyone either! 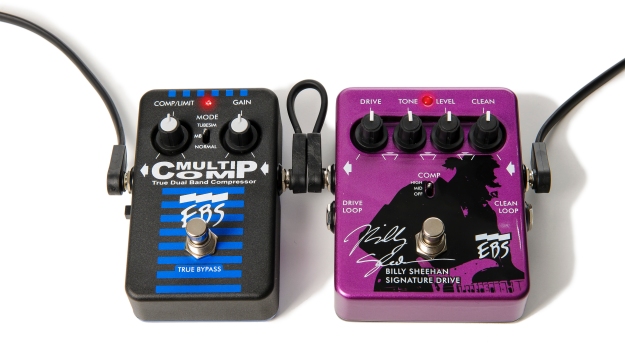 The new PCF patch cables or ‘jumpers’ saves space on your pedal board! Available in four lenghts.

Speaking of accessories, EBS offers more than these cables and you can check it all out here.

Another new great accessory, is the EBS CarryOn pedal board system, based on the concept to make possible to bring your pedals onboard as hand luggage when you travel. The light, yet sturdy bag, loaded with the actual pedal board and plenty of featured items including 3M Dual Lock, makes it a great addition to the traveling musician!

Find out more about all the EBS gear presented as new at MusikMesse by following these links:

The Artists
We had the honor to include appearances at the booth by EBS Artists Jay-Tee Teterissa (guested by his daughter Jaycilee and guitarist Paolo Mendonca), Peter Sonntag & Reno Schnell and Blind Guardian touring bass player Barend Courbois feat guitarist Timo Somers, they all did their best to break through the wall of sounds at the show. Peter and Reno, as well as German EBS Artist Julian Köster with his band Filou also played at the Agora Stage. 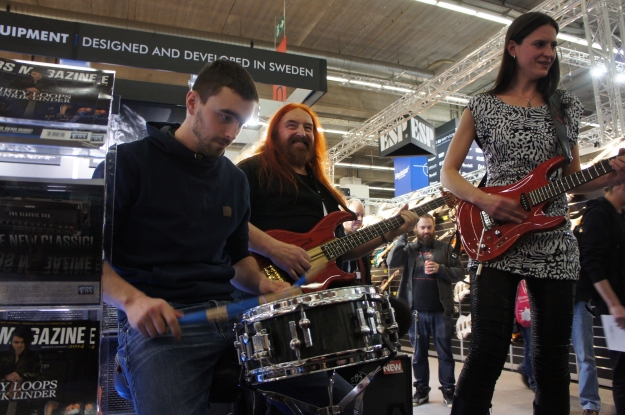 Among the visiting EBS artists at the booth that came to hang out, we had Peter Iwers from In Flames, who came to the show to present his new signature model bass with Ibanez, Nic Angileri (ex-Jorn bassist), EBS pedal artists Marco Mendoza and Yolanda Charles. We also got visited by many other artists including Victor Wooten, Per Mathisen (Dance With A Stranger) and Pär Sundström (Sabaton), to mention only a few. 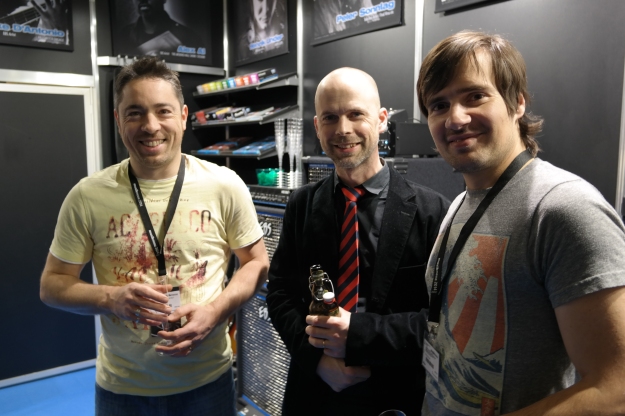 Julien and Nicolas from EBS new distributor Filling Distribution, France, with Ralf (in the middle) from EBS.

Does the MusikMesse have a future in the ‘futuristic’ city of Frankfurt?
That’s a question that is relevant to ask due to the fact that the show seems to have dropped in numbers of exhibitors and visitors over the recent years. We do believe in its potential to expand again, but there’re some things to consider for the MusikMesse in order to make that happen.

The futuristic skyline improves every year, but can the MusikMesse improve too?

As it is right now, the NAMM Show has a much greater ‘fun-factor’ much because there’s a different vibe at NAMM that is present 24h/day around the whole area, and not just at the show. Frankfurt should learn from that and make music happen not just at the show, but around the city as well if they’d like to attract more people to consider it worth the trip. Another thing is the time distance between the two shows, which is currently no more than a couple of months. Keep them separated by 5-6 months and companies could spread out their new releases between the two and make the shows more attractive to visit for exhibitors, media, the public and buyers.

Regarding the loudness, that we’ve already mention – here’s some heads on tips for MusikMesse to consider:

…simple as that, right?

Special thanks!
We would like to thank Mattisson basses, Marleux basses, Vychodil basses and U-Bass for lending us gear. As usual, we brought cables from our friends at Tsunami cables.

Check out the pictures from the show below, and we hope to see you all next year!

Next up is the FUZZ Guitar Show in Gothenburg, Sweden, May 10-11.